A Brief History of the Montagu Community Church – Part 1 – “Beginnings”

Due to political tensions within the local Anglican church and the fact that other English speaking Christians had moved into the town of Montagu, the need arose for an Interdenominational Church to cater for English speaking people.

Some of these Christians were driving into McGregor on a Sunday evening to attend an English service held under the auspices of the Monte Vista Presbyterian Church in Cape Town. Mr. Allan Tidswell, the elder from Monte Vista who ran these services, was approached to start similar services in Montagu, but with the proviso that it must be independent of any specific denominational control (ie not to be affiliated to the Monte Vista Presbyterian Church or any other.) The Founders wanted a church which would cater for the needs of English speaking Conservative Christians with a “non-Charismatic” approach to worship and evangelism.

An inaugural meeting was held on 4th May 1986. Those attending were from the Anglican, Baptist, Congregational, Methodist Presbyterian and Roman Catholic denominations. Mr. Basil Whitehead was elected Chairman, Ms. M. Lawrence as Secretary, Mrs. B. Sherwood as Treasurer. Mrs. B. Hough undertook to play the piano for the services.

Mr Basil Whitehead was a mature Christian with experience as Church Warden in Robertson and Montagu. The Committee felt the need to have some kind of “higher” ecclesiastical control, in addition to that on the local front. The Committee thus appointed Mr. Alan Tidswell with the responsibility of pastoral oversight of the congregation with authority to appoint preachers. Mr. Tidswell was a graduate of the Bible Institute of South Africa and Elder and lay preacher in the Monte Vista Presbyterian Church. Although only Mr. Tidswell was appointed by the committee, he used Bishop Douglas and the Rev Robert Smith as advisers in the work at Montagu. Before services commenced, the committee required from Mr. Tidswell an undertaking as follows: “In order that the preaching and teaching be Biblical, and not blown here and there by every wind of teaching and by the cunning craftiness of men, that at all times the historical doctrinal standards of several denominations which are in full agreement on the fundamentals of the faith be ensured. “ These doctrinal standards are embodied in the following confessions of Faith (1) The Thirty Nine Articles (Church of England (2) The Westminster Confession (Presbyterian) (3) The Savoy Declaration (Congregational) (4) The London Confession 1689 (Baptist)

These confessions thus provide an objective basis for choosing suitable preachers for the Montagu Community Church. Every preacher is therefore required to hold to a doctrinal standard in sufficient agreement with the above, so that he will not preach contrary to the standards at Montagu. The trustees have committed to this in writing.

Services duly commenced on 15th June 1986 and thereafter on the 1st and 3rd Sundays of the month. The first communion service was on the 7th December 1986 and led by the Rev Robert Smith. There is a note on file with records that the Anglican members had no objection in using individual glasses instead of the chalice to which they were accustomed.

As far back as the AGM of 2 July 1988, the need for a constitution was raised by Mr. L. Kachelhoffer. The constitutions of various independent churches were looked at and eventually the congregation on 26th April 2001 adopted a constitution similar to that of the Villiersdorp church. The protection of the founders’ interests is enshrined in the constitution.

It is good to keep in mind the vision which the first Chairman, Mr Basil Whitehead, had for Montagu and surrounding towns. He had hoped that one day Montagu would take the lead in establishing similar churches in towns such as Bonnievale, Robertson and Swellendam and that a Pastor be appointed to oversee these churches. The Montagu Church was instrumental in establishing the Bonnievale Church and shared a pastor in the person of the Rev. Claude Stighling and Mrs. Pat Holbery, as pianist, made a vital contribution at Swellendam in the early months of its life.

The Montagu Community Church has had its share of trials and personality clashes of one sort or another. That the congregation survived without a constitution until 2001 is due to the Grace of God and the determination of all the role players to protect God’s Church. Tribute must be paid to members of those early years who endured uphill setbacks but did not despair and kept the church alive ensuring its existence to this day. A church which you, as succeeding generations found attractive and spiritual enough to join and worship the Lord in.

Basil Whitehead was succeeded as Chairperson by Barbara Sherwood in 1988, and she in turn by Robert Holbery in 1991. During Rob Holbery’s term, services were held every Sunday. The Holbery’s input took the church to a more spiritually mature level and the attendance at the services increased. In 1977 Des Sterley became Chairman and it was during his term that the congregation consolidated and took an interest in the youth of the area. Keith Foster succeeded Des Sterley in 2003 and Jonathan de Villiers in XXXX.

Mr. Tidswell’s term came to an end and at the AGM in July 1992 the congregation appointed a “Committee of Pastoral Oversight” known as the ‘Cape Town Committee’ to act as the “higher ecclesiastical authority” responsible for appointing preachers and to exercise pastoral care over the congregation. This committee consisted of the Rev. Robert Smith, Brian Turner and the Rev. Clive Tyler. Brian Turner was appointed convener and acted as Hon. Pastor until the appointment of Rev Claude Stighling. The old Cape Town Committee were confirmed together with Graham Kissack on 26 April 2001 as Trustees of the Montagu Community Church.

Through the leading of the Holy Spirit the congregation was introduced to the Rev Claude Stighling, first as a visiting preacher from Cape Town, and later, when he moved to Montagu, as a member of the local committee. For the record he made it very clear that he had no desire to do a “hijack” of the congregation and turn it into a Baptist church, rather with true humility, he made himself available for whatever the congregation and the Cape Town Committee required. Some years later, Des Sterley saw the value of Claude’s contribution and recommended, with the Trustees’ approval, that the congregation designate Claude as Hon. Pastor of the Montagu Community church. At no time did he seek the position.

(with thanks to Brian Turner – ( part 2 still under construction) 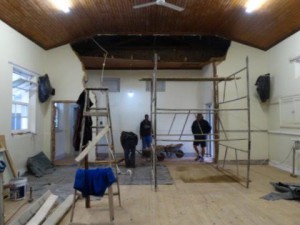